When residents of Bathurst, in the Central West of NSW, turn on the tap to fill the bath or make a cup of tea they are probably unaware of the efforts being undertaken to get their water to them as cheaply as possible.

Water and sewerage services are provided by the Bathurst City Council.

The Macquarie River is used as the “conduit” to transport water from the Chifley Dam to a pumping station outside the city.

The water is then processed through a filtration plant before being pumped to reservoirs for gravity feeding to the users.

Waste water is pumped to a central treatment plant where it is treated through trickling filtration tanks and extended aeration activated sludge tanks. 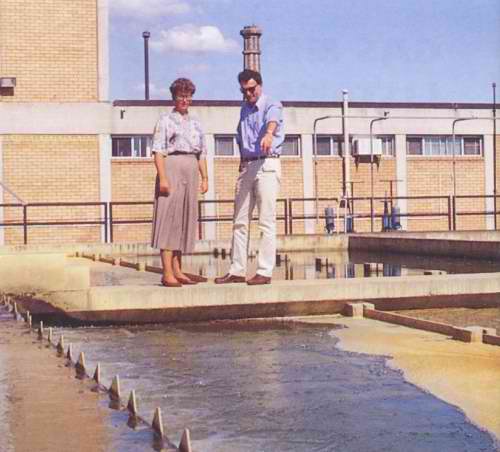 Sandra Gamble and Wariwck Battye-Smith check the water filtration operation, in the background is the chimney from the boiler house of the first Bathurst water pumping works built in the 1890s.

The cost of electricity for the water supply and disposal system averages over $500,000 per year, making the account the biggest single component of the Bathurst City Council electricity bill and the twelfth biggest customer of Southern Mitchell Electricity. The majority of this electricity is used in water pumping operations.

They determined that large savings were possible, especially in the areas of tariff changes and power factor correction, and recommended that the Bathurst City Council commission an energy management consultant to carry out a complete audit.

As expected, the largest yearly saving involved the changing of the tariff under which the council was buying electricity. The council decided to go on to a three part time-of-use tariff, which includes three energy rates for use in peak, shoulder and off peak periods together with a comparatively smaller maximum demand charge.

This enables a $90,000 saving to be made by rescheduling pumping from the filtration plant to the reservoirs to off peak hours.

Southern Mitchell’s cost of supply is lower in off peak periods and savings are passed on to clients to encourage them to move operations to these hours. This also minimises system demand peaks and delays the need for future capital expansion.

Comparison of the capacity of the reservoirs and water use characteristics indicated that off peak pumping could supply demand during the greater part of the year and pumping in shoulder tariff times will only occasionally be required.

A similar restructuring of pumping operating schedules at the waste water treatment plant could save $5,300 by shifting as much as possible of the pumping activity to the off peak period.

Savings of over $24,000 per year were identified as being available from the installation of power factor correction equipment at a cost of $20,000.

The installation of transducers, power and flow monitoring instrumentation and energy reporting computer software was recommended so that individual pump performances can be monitored and managed for maximum energy and cost conservation. The information gained would also show which of the pumps perform the most efficiently and when deteriorating performance indicates that overhaul or replacement is due.

Recalibration of measuring equipment was also suggested as a discrepancy was found between the records of volume of water pumped and the capacities of the pumps plus spot measurements of flows.

The energy required to pump water can often by reduced by using variable drives to slow down the water velocity in the pipes to minimise friction losses. At Bathurst, friction losses are already low because of relatively short pumping distances and generous pipe sizes. This allows for maximum pumping in off peak tariff hours and a strategy to use the available pumps in combinations that will keep them operating at the most efficient load level on their performance characteristics curve.

As an example of this, the pumping station at the filtration plant has four pumps, two high voltage 375 kW pumps and two low voltage 190 kW pumps. In the past, the strategy was to use one large pump and one small pump to stay within the 500 kVA limit of the tariff that has now been eliminated. Using the two big pumps results in a 16% gain in efficiency and a 5% loss through additional pipe friction resulting in an overall efficiency gain of 11%. The two big pumps can also do the job faster and make it easier to keep pumping operations within the cheaper off-peak schedule.

The two smaller pumps combined have the same capacity as one of the bigger pumps so they can be kept in reserve in case of a big pump malfunction.

Another interesting suggestion involves the Chifley Dam, which is to have its wall height and storage capacity increased in the near future. The extra height will give sufficient head for the installation of a 700 kilowatt hydro generator in place of the needle valves which are required to provide a steady release of water into the river to supply Bathurst.

An electrically powered air compressor is used to aerate the dam to improve water quality. The consumption of the compressor averages 3300 kilowatt hours per month at a cost of $500 on the Off Peak Two tariff.

The hydro generator proposal is being investigated together with capital outlay, ownership and operating strategies. Southern Mitchell is very interested in the proposed project and the possibility of feeding surplus electricity, above that needed by the compressor, into the supply network.

An area of potential saving identified was the elimination of illegal connections from roof gutters to the sewers. In rainy periods, these increase the volume of waste water that must be pumped. The potential for savings is approximately $5000 per year.

Methane generated in the primary digester of the central waste water treatment plant is used to power a small heating system to maintain the digester at a temperature of 24EC. Excess methane is flared and one proposal was for this to be metered to determine whether there was sufficient volume for further utilisation.

Major issues raised are being addressed immediately while others are being considered or implemented as part of the ongoing maintenance schedule.

Warwick Battye-Smith considers that energy consumption and conservation should be an ongoing part of the operations and something that should be integrated into any capital upgrade or installation proposal. “Nowadays someone in my position cannot be classified only as an engineer,” he said.

“Instead I must be a manager and must continually ask the questions: ‘Are we doing it as well as possible?’ and ‘Can we improve our performance?”

“I have to know where to find the right information and know to call in the experts for help. What we have done demonstrates conclusively that we must work closely with our local electricity supply authority if we-want to achieve any real savings!”

Denis Cooke completing the energy audit report on the Bathurst water and sewerage services.
Part of the cost of the audit was covered by a DPIE Enterprise Energy Audit Program grant.