Whilst this story occurred some time ago now, we think that it is worth repeating here because the principles are highly relevant and applicable today.

Since 1981, when the Group Energy Conservation Programme was initiated much has been achieved and learnt culminating in energy savings totalling one million dollars for 1983/1984.

Addressing the concept of energy management four years ago, the daunting task of gathering, preparing, analysing and acting on vital information in such a diverse and large group as James Hardie began with the assistance of consultants.

The Group Energy Conservation Programme was established and four phases of action were planned. Phase 1 of the programme, called the ‘Base Year Energy Audit’, involved the gathering of all the information necessary to determine how much energy was being used by the group, the cost of this energy and where it was being used.

The cost of the differing types of energy and their use were also recorded.

Phase 2 called ‘Plant Energy Surveys’ determined energy usage and cost at individual factories, warehouses and offices. As was expected electricity was the most expensive form of energy used throughout the James Hardie group. Investigations into the purchasing of electricity revealed that some sites were able to improve their costs through changing to appropriate tariffs. Under Phase 3 or ‘Energy Monitoring’ of the programme, a sophisticated system was established using the group indicating such things as energy use and performance and costs. This enabled each site to evaluate their own progress and to set new targets.

Phase 4 involves the transfer of the responsibility for the continuation and further success of the Energy Conservation Programme to the business groups and this should occur early in 1985. Throughout the programme it has been a priority to obtain full cooperation and support from all the staff to achieve the success required. Apart from involving those directly responsible for various tasks within the programme, all needed to be informed and made aware of the great advantages of the programme for success at all levels. The James Hardie Energy Newsletter was conceived for this purpose. This edition is the fourth to be published.

The benefits of the group energy conservation programme are obvious. Increased savings contribute to increased profitability and therefore increased growth. Perhaps the greatest benefit has been the effect that the programme has had on staff at all levels of the organisation. Technical staff have been required to keep abreast of the latest technology especially where the purchase of new equipment is concerned. 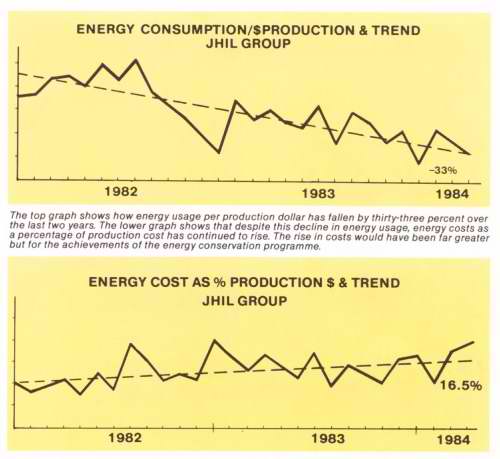 Greater communication has been achieved across the group through the programme and its experiences. An element of competition has been introduced between plants manufacturing similar products to see which operation can be the most efficient which can only be healthy to the group as a whole.

The depth of the James Hardie Energy Conservation Programme has shown what can be achieved through a systematic concerted effort. The rewards are great, the expertise gained is invaluable.

Contact us (phone 02-9871 6641) if you would like further information about Energy Conservation Programmes or any assistance with energy management.